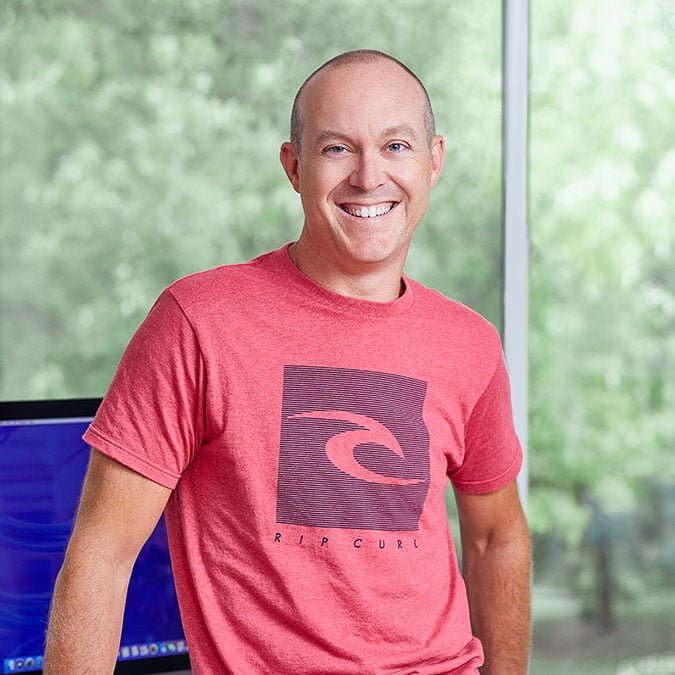 A hands-on man who works closely with people, Philippe Daoust has more than 20 years of experience in the IT and user service field. A passion he got from his father that he’s passing on to his own children.

Recruited by Desjardins in 1997, Philippe rose to team leader thanks to his engagement, resourcefulness and leadership. After 10 years there, he made the move to the Cirque du Soleil where he put his high-level skills to use for five very full years. That’s where he fell in love with the Apple environment.

In 2011, a new world opened its doors to Philippe, the world of television. As IT director as Productions J, he worked on the most ambitious projects for the small screen: Star Académie, Occupation Double, La Voix, L’été indien and Vol 920.

He built a dynamic team that set up all the infrastructure needed for the various productions, in Quebec and overseas. With his valued accomplices, he developed custom solutions, like designing a multimedia platform unlike any of its kind for reality show auditions.

The year 2015 was a major turning point, sparked by the launch of ProsperIT Solutions Inc. Philippe was off on his own! While his collaboration with Productions J continued, other big names soon joined his client list, including Productions Déferlantes and Les Productions Feeling.

His partnership with Céline Dion had him supervising the Web capture of concert excerpts and, on a sadder note, organizing the multi-camera webcast of René Angélil’s funeral for fans around the globe. He also orchestrated clever digital initiatives to highlight the singer’s return to the stage.

Since 2016, ProsperIT has also been setting up the network infrastructure of C2 Montréal, a major international event that brings together the most innovative leaders from around the world. More than 5,000 people attend, equipped with some 7,000 cutting-edge technological devices.

From his early days in the computer store with his first employer, Marc-André, to holding the reins of his own company, Philippe has surrounded himself with the best of the best to provide his clients the most efficient service and most ingenious solutions around. And he does it all with a smile!